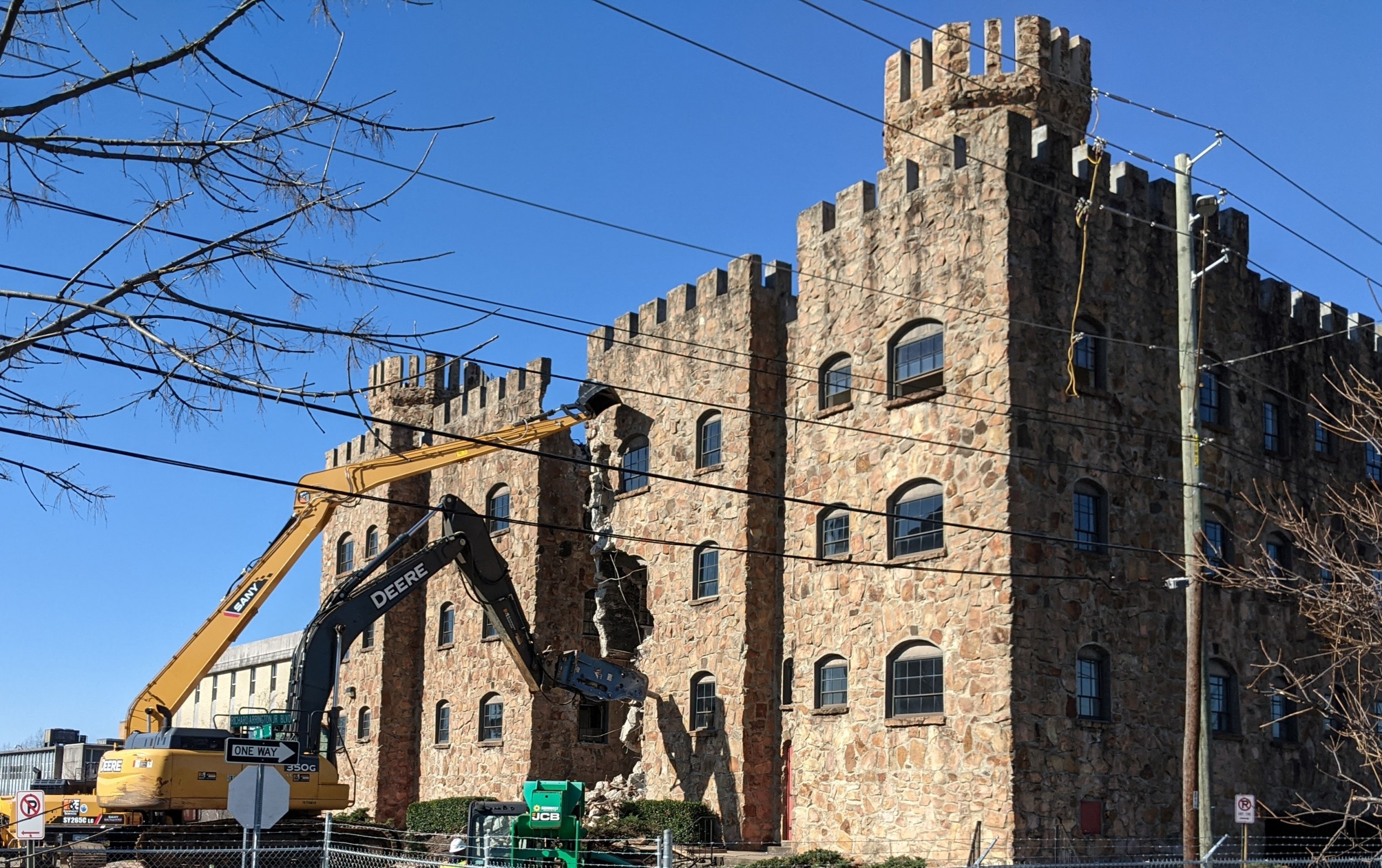 When Ambipar Abatement Division Manager Corey Bingham learned his team had been hired as subcontractors for the demolition of Quinlan Castle, he admits he had misgivings. They evaporated the minute he stepped inside the Birmingham, Alabama landmark — which had last been occupied over three decades ago.

“Personally, I never like to see a structure that’s been held in such regard in the city’s history brought down,” he said. “From the outside, the castle still looked magnificent, and the exterior walls looked sound. The interior was a completely different story.”

The floor decking, Bingham explains, was built of terra cotta blocks (clay-based ceramic bricks), which were held together with poured concrete — and all of the supporting structural members were significantly damaged. “When the integrity of that kind of decking is compromised in any one place, it compromises the entire system” — unlike, for instance, steel-reinforced decking, which can be replaced at failure points, and tied back into the surrounding structure.

“The roofs had been leaking for decades, causing significant damage to the interior surfaces —which were mostly plaster and wood. There was fallen debris, decay and deterioration everywhere. If someone were to walk across the wrong spot on any given floor, they would have probably fallen through to the floor below.”

What happened to the Castle?

According to BhamWiki.com, Quinlan Castle was constructed in 1927, and originally housed 72 efficiency-size apartments. It was vacated in the late 1990s, and ownership defaulted to the City of Birmingham. Over the next decade, the city regularly solicited proposals for its redevelopment.

In 2008, the building was purchased by Southern Research, a non-profit scientific research company headquartered next door to Quinlan Castle. Southern Research made repairs to the exterior, but did not have the capital necessary to safely renovate the interior. “For 13 years,” Bingham said, “they exhausted every possible option for raising the funding support needed to restore the two buildings.”

But when Miami’s Surfside condominium building collapsed in June 2021, killing 98 people, many organizations took a serious look at the safety of their structures. Southern Research was no exception, and its response included hiring structural experts to assess Quinlan Castle.

“When SRI received the final structural analysis report in 2021,” Bingham said, “there was no doubt: It had to come down.”

“Thankfully,” said Bingham, “most of the building’s asbestos was limited to the basement and the crawl spaces beneath the first floor.” His crew followed standard abatement procedures: safeguarding themselves in Tyvek suits with respirators equipped with HEPA cartridges; sealing the area — and the asbestos — with poly sheeting; utilizing negative air machines to create a modified containment.

“After that, our abatement team sprayed the asbestos with ‘amended water’ — which has a surfactant that penetrates the materials, and prevents dust and emissions. Then we started the actual abatement: Removing the asbestos, placing it into properly-labeled bags, and transporting it in an enclosed trailer to a certified asbestos landfill.”

At every stage of abatement and demolition, Bingham continues, the public’s safety and his team’s safety was Priority One. “Fortunately, no interior demolition had to be done by hand. It was all done with heavy equipment excavators, and everyone was outside of the structure at a safe distance from any potential hazards.”

Could Quinlan Castle had been saved?

Bingham said any effort to restore the castle would have come at a tremendous cost, and probably would not have been successful.

In addition, the space itself was entirely incompatible with SRI’s needs — which will be met by the building that will replace the Castle: A new biotech facility housing modern labs, and significantly expanding Southern Research’s work on infectious and chronic diseases.

Which points to the brightest spot of the entire abatement and demolition process for Bingham and his team. “It’s been an absolute pleasure working with the people of Southern Research. They’ve been more than accommodating and supportive since Day One.”

Given Southern Research’s breakthrough contributions to everything from effective cancer chemotherapy and virus research to air pollution control technology, it’s clear that the new building will ultimately serve the greater good. “Nobody took the castle’s demolition harder, or more seriously, than the folks at Southern Research. But there’s no question they made the right decision.”

To learn how we can help you with Abatement & Demolition: