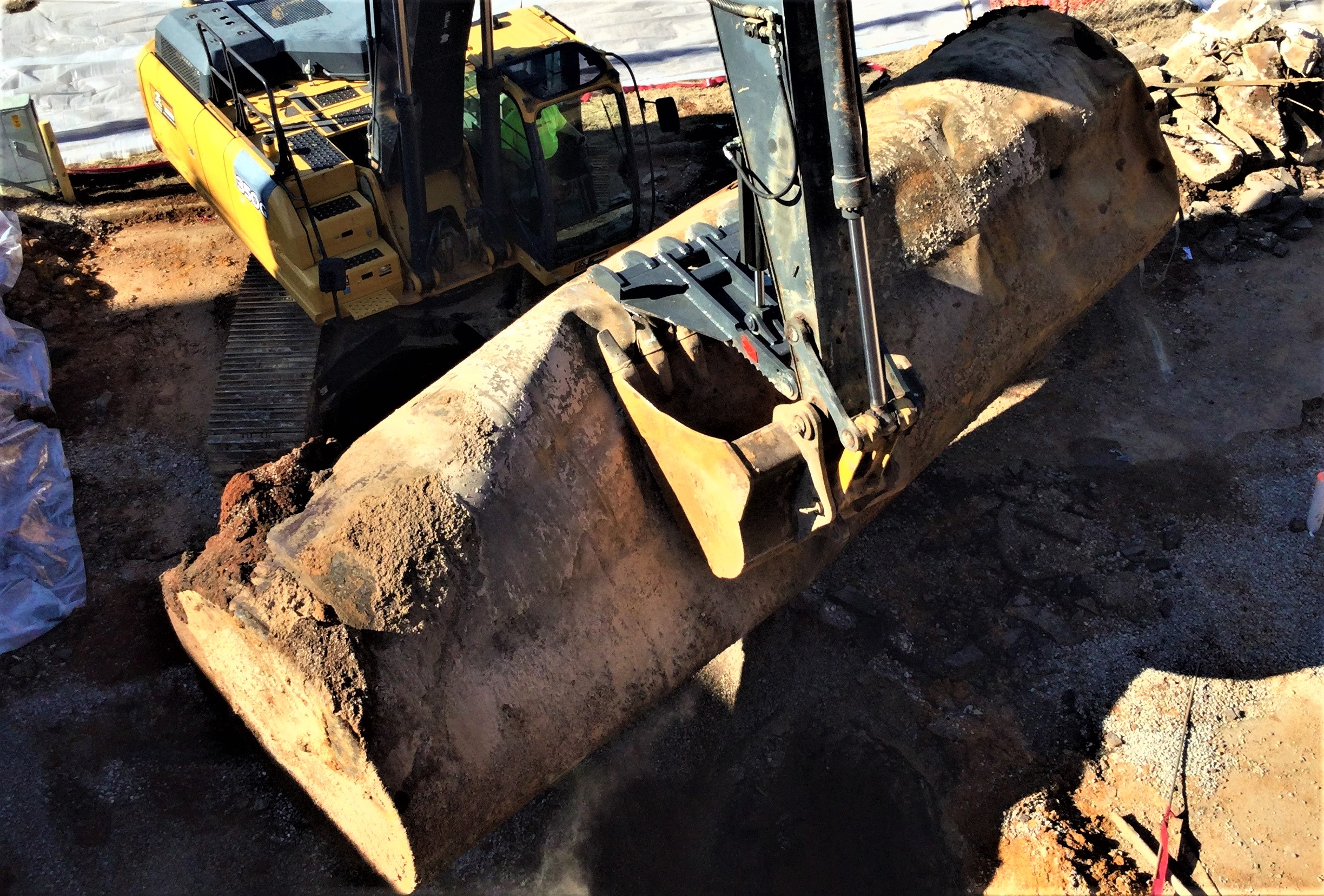 The University of Alabama in Birmingham isn’t merely the city’s largest employer, by more than 3-to-1 over Number Two — Regions Financial Corp. (21,000 vs. 6000). It’s the city’s driving economic engine, with a research hospital that’s nationally-renowned for the number of breakthrough medical discoveries it’s produced over the years. Closer to home, UAB is a longtime, and highly-valued, Ambipar Response client.

In early 2022, UAB hired Ambipar Response’s Alabama Office for assistance with a 40-foot-long, 10,000-gallon Underground Storage Tank (UST) buried beneath a parking lot scheduled for redevelopment. “The tank, which had been long abandoned, was built to provide fuel for one of the university-buildings’ generator,” says Ambipar Response project manager Thomas Harbin.

“USTs are a huge problem for the construction industry, because once one is discovered on a job site, by law it has to be dealt with properly — with full and accurate documentation of all steps taken — before a project can be continued. ‘Downtime’ is, without question, the nastiest word in the English language to a General Contractor, which is why we mobilized our team to respond the day we received the call.”

“First,” Harbin explains, “we located and exposed the tank — to determine the best course of action. For this stage of every UST project, we use a licensed geologist, who is a third-party professional — ensuring that there is no risk of bias, or conflicts of interest, in our reporting and recommendations. In addition to his experience with countless similar projects, he also knows all the proper channels and contacts at ADEM (Alabama Department of Environmental Management) to engage, and ensure that we’re always in full compliance.

“With most USTs, you generally have two options: If the soil samples indicate no legally-hazardous contamination (in this case, it would be hydrocarbons), you can thoroughly clean-out the tank, then fill it with concrete or aggregate, and leave it where it is.”

“The problem with that solution, particularly in a place like the UAB campus — where the landscape is almost constantly evolving — is that there’s a distinct chance you’ll someday need to bury something right where the tank is located. And it goes without saying, removing a 600-gallon tank filled with concrete or aggregate would be a monumental undertaking. Which is why we recommended removal. Remove the tank, and you remove that future problem.”

Despite the time that had passed since the tank had last been used, there is always a threat of vapor and fumes — which do not mix well with the kind of sparks that can occur when metal is involved. “The first thing we did,” says Project Superintendent Jason Holmes, “was triple-rinse and empty the tank, then we de-gassed it, by introducing nitrogen and forcing out all of the oxygen.”

“Before we began the excavation process,” Holmes continues, “we thoroughly vetted the area for the presence of utility lines. We checked public records through 811, then used ground-penetrating radar for confirmation of 811’s findings — which indicated that the area around the tank was clear of lines.”

When utility lines are present, Holmes notes, Ambipar Response uses a high-pressure water-blasting process known as Hydro Excavation to loosen, and vacuum, the surrounding soil. “That wasn’t necessary in this case, so we used a standard excavator — then removed the tank with a crane.”

Once removed, the tank was transported to a scrap metal facility — where it will be recycled. “We were even able to re-purpose the soil around the tank. When soil is below 100 PPM in hydrocarbons, it can be used either as backfill — or used in aggregate.”

From the start of removal to tank disposal, the project took 5 days to complete. It would have been a lot quicker, Harbin says, if not for heavy rains — which led to additional work replacing nearby pipes. “Underground tanks are such a costly problem for the construction industry, we’ve invested heavily in the equipment needed to take action as quickly as possible. Same goes with our manpower: In addition to our experienced crews, we have two ADEM-licensed, ALPAC (Alabama Petroleum Equipment Contractos) Certified project managers on-site, directing activity when tanks are removed.”

And while Harbin rightly takes pride in Ambipar Response’s superior resources, he’s quick to note the company’s solid working relationships with several local competitors. And with good reason. “We regularly perform work for them when they lack the resources necessary!

“We routinely get calls to inspect, clean, close and/or remove USTs. Many, like UAB, come from businesses, contractors and property owners who never even knew they had tanks buried on their properties. In one instance, a contractor called us to remove two USTs they’d discovered. By the time we were done, we had uncovered and removed sixteen tanks.

“Here’s the thing,” Harbin concludes. “Just because it’s buried, that doesn’t mean a tank can’t cause significant problems — not only for your business, from a liability standpoint, but for the people living or working nearby.

To learn how we can help you with UST Removal: